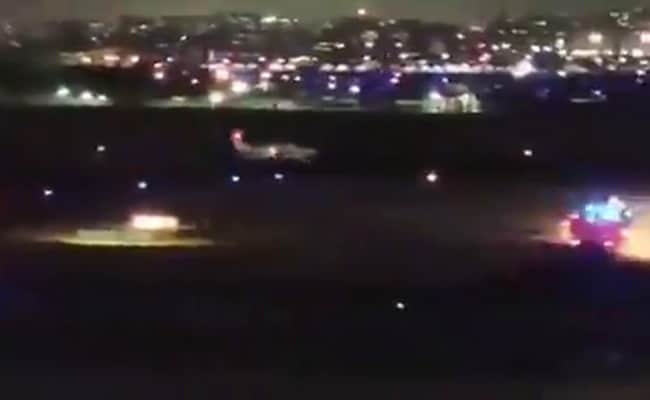 The aircraft made belly-landing at 9:09 pm, officials said.

A day after an air ambulance made an emergency landing at the Mumbai airport after losing a wheel during take-off, a video of the incident capturing the moment when the Beechcraft VT-JIL aircraft belly landed at the airport has emerged on social media.

In the over 2 minute video, the Jet Serve Ambulance carrying two crew members, one patient, one relative and one doctor is seen landing on the runway at 9:09 pm. A screeching sound followed by a spark (due to friction of the airplane’s body with the tarmac) is seen before it comes to a grinding halt. The airport had foamed the runway in order to avoid the aircraft catching fire.

The airport’s emergency response team including the fire and rescue responders, follow-me vehicles, medical team on standby are seen approaching the aircraft to ensure the safe evacuation of the passengers.

#Maharashtra: Air ambulance with a patient onboard made an emergency landing at the Mumbai airport last evening after losing a wheel during take-off from Nagpur. pic.twitter.com/6DKQffRFbW

The Jet Serve Aviation C-90 aircraft VT-JIL was operating an ambulance flight from Nagpur with a patient on board. While departing, a wheel separated and fell on the ground forcing the pilot to request for an emergency landing at the Chhatrapati Shivaji Maharaj International Airport.

All passengers were evacuated safely and flights operating in and out of the Mumbai airport remain on schedule.

The successful landing drew praise from Civil Aviation Minister Hardeep Singh Puri, who took to Twitter to praise the pilot for his immense presence of mind.

A Jet Serve Ambulance with a patient onboard lost a wheel during takeoff from Nagpur. Showing immense presence of mind Capt Kesari Singh belly landed the aircraft on foam carpeting in Mumbai. All onboard are safe. Commendable effort by @DGCAIndia@CSMIA_Official & other agencies. pic.twitter.com/aelehUB7DS