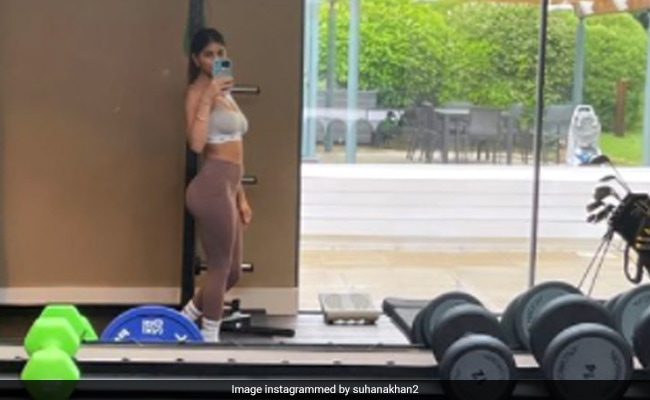 Star kids have for long captured the imagination of people even before their Bollywood debuts. And when your father is Shah Rukh Khan, one of the most popular actors in the world,  there is bound to be several people interested in you. And Shah Rukh Khan’s daughter Suhana Khan has handled all the attention that came her way with grace and charm. So it comes as no surprise that she continues to be a darling of her Instagram followers, who are nearly 2 million in number. Inspiring her fans to take the fitness route, Suhana has now shared a selfie from the gym that is sure to make you want to hop on the workout train.

In the image, Suhana is posing amidst a bunch of workout equipment. She is seen looking absolutely stunning in workout pants and a sports bra. Take a look at the photo here. 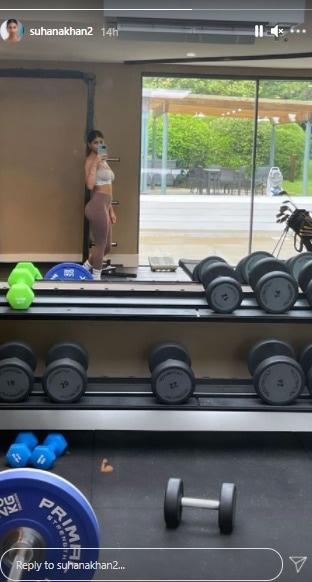 Her gym selfie comes just days after she shared an endearing photo of herself and her father on the occasion of Father’s Day. In the image, a baby Suhana can be seen giving Shah Rukh Khan a kiss. Sharing the photo, she simply wrote, “Father’s Day,” with a heart. The doting father was quick to reply to his daughter and shared the same image. Along with it, he wrote, “Miss you baby so much that I am using emojis,” followed by heart and heart-eyed emojis.

Suhana also shares fun images of herself and her friends on Instagram. We often see her with other star kids including Shanaya Kapoor, Ananya Panday and Navya Naveli Nanda.  Sharing one such photo, she wrote, “Just me being the main character. Lol.” Take a look at the image.

Suhana Khan seems to have inherited her love for acting from her father and chose to study films at England’s Ardingly College. She is presently a student at New York University. Pursuing her love for the craft, Suhana Khan has dabbled in several theatre shows in the past. She made her acting debut in the year 2019 with the short film The Grey Part Of Blue, directed by Theodore Gimeno.

Shah Rukh Khan is best known for his work in films such as Darr, Dilwale Dulhania Le Jayenge, Kuch Kuch Hota Hai, Mohabbatein, Kabhi Khushi Kabhie Gham, and My Name Is Khan, among several others. He was last seen in Anand L Rai’s 2018 film Zero, alongside Anushka Sharma and Katrina Kaif. He will next be seen in his much-awaited film Pathan, opposite Deepika Padukone.