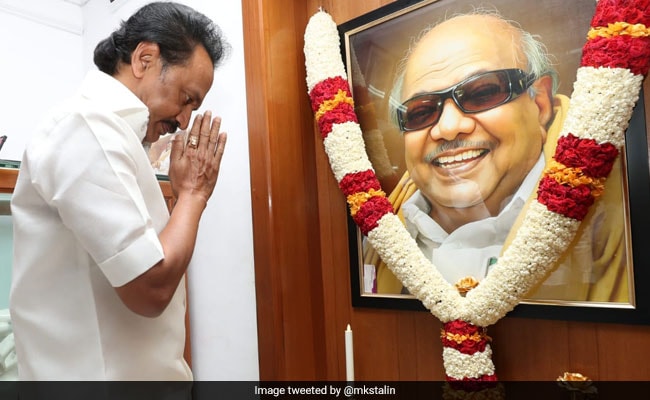 “Stalin is the future of the party,” said late DMK patriarch M Karunanidhi about six years ago at a party meet when his son was the treasurer. It has come true on Friday with MK Stalin being sworn in as the Chief Minister of Tamil Nadu. Though the DMK could not capture power in 2016 despite a no holds barred contest, Stalin continued to relentlessly take the fight against the AIADMK ahead both in the State Assembly and outside of it, which helped him realise the dream of storming back to the seat of power, Fort St George after a decade.

While he targeted the AIADMK and BJP governments at the State and Centre holding a slew of protests over the years on several issues, his position in the party was strengthened further when he became the working president in early 2017 and the next year its president following the death of Karunanidhi.

Stalin who began his political career as a teenager grew steadily in the party and he was given more responsibilities in the government in a step-by-step fashion when Karunanidhi was the Chief Minister during 2006-11. Having successfully warded off the challenge from his Madurai-based brother MK Alagiri, he grew stronger and the entire party organisation from top-down rallied behind him. Also, he picked the directly ”writing to the cadres” style of his late father to enthuse and apprise workers of the party stand on issues.

Be it the the protests against hydrocarbon exploration projects in Cauvery delta districts or the state-wide stir against the Citizenship Amendment Act and collection of ”two crore” signatures against CAA, Stalin did his best to corner the governments at the Centre and state and at the same time and strengthened his party’s electoral prospects.

Protests against the Centre’s farm laws, a rally near Raj Bhavan last October seeking Governor Banwarilal Purohit’s assent for a State Bill giving 7.5 per cent reservation to students of government schools in medical admissions were among the initiatives which apparently had an impact when people voted on April 6 to choose the next government.

Followed by the big victory in the 2019 Lok Sabha polls when the DMK and its allies bagged as many as 38 seats out of the 39, the Stalin-led party had a distinctive edge over the AIADMK in rural civic polls too which was held towards the end of that year. The winning streak eventually resulted in a similar win in the Assembly polls too when the DMK and its allies garnered 159 seats out of the total 234.

The AIADMK and its partners could emerge victorious only in 75 constituencies. Born on March 1, 1953, Stalin campaigned for DMK in the 1967 elections when he was only a 14-year-old school student. Incarcerated under MISA in 1976, he had held several party posts over about four decades before he became the party chief. For a long time since 1984, he was the youth wing secretary and he became party deputy general secretary in 2003. He was re-elected treasurer in 2015 and became an MLA for the first time in 1989 from the Thousand Lights segment, from where he was re-elected thrice.

In 1996, Stalin was elected Mayor of Chennai and re-elected in 2001. However, he had to exit with the AIADMK capturing power, which enacted a law that barred elected representatives also holding local body positions. In 2006, he became the Municipal Administration Minister in the DMK government and went on to become the Deputy Chief Minister in 2009.