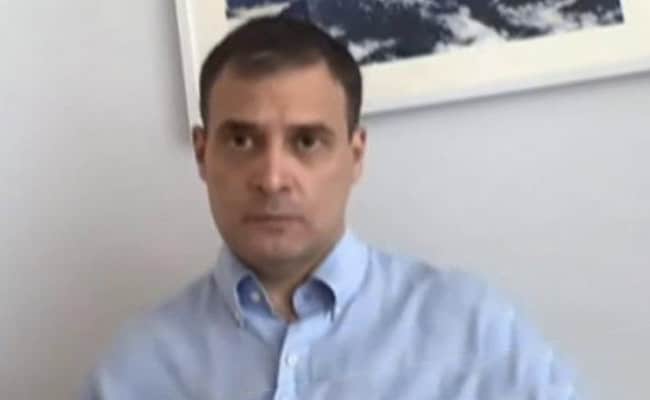 Congress MP Rahul Gandhi on Tuesday took a swipe at Prime Minister Narendra Modi as he released a white paper to help the government prep for a third wave of Covid infections – which experts say will likely be inevitable as the virus acquires mutations linked to immunity evasion.

“In the second wave many died needless deaths… we couldn’t provide them with oxygen. Prime Minister’s tears cannot wipe the tears of families who lost family members… his tears cannot save them, oxygen can. But he didn’t take it seriously as his focus was on Bengal (elections),” he said.

Mr Gandhi was referring to an online interaction the Prime Minister had with health workers in UP’s Varanasi – his parliamentary constituency – last month, during which he appeared emotional as he spoke about those who had died because of COVID-19.

Mr Gandhi, who has been critical of several aspects of the government’s handling of the pandemic and its policy, said the paper was a “blueprint on how to react to the third wave… to provide the government with information and insight on what went wrong (handling the second wave)”.

“The central pillar is vaccination. It is very important we have aggressive and 100 per cent vaccination,” he said, as the country scrambles to overcome vaccine hesitancy and supply issues that affected pace of inoculation in the initial weeks and months of this year.

The second pillar, Rahul Gandhi said in his white paper, is to ensure the government has adequate numbers of hospital beds and medical resources, including oxygen (and oxygen production capabilities), medicines and life-saving equipment like ventilators.

“The government must be prepared. (Part of) prepping for the third wave means to understand what went wrong and correct it…” he stressed.

Rahul Gandhi also once again flagged the need for direct cash transfers to the poorest sections of the population – those who have been worst affected by the pandemic and the lockdown.

“Covid is an economic and social disease too. We have given NYAY concept…if PM doesn’t like the name he can change it but the aim is to have money reach the poor people,” he said, referring

The second Covid wave – trends suggest it is now in decline – wrought havoc in India, with lakhs infected and thousands dying every day. At its peak the country recorded over four lakh new cases and more than four thousands deaths per day.

The number of deaths has since been questioned, with comparative analysis of mortality data indicating that several states have unaccounted deaths running into tens of thousands.

The undercounting of deaths was only one aspect of the second wave; hospitals were overflowing with patients, medical staff were left traumatised and medicines were in short supply.

In particular, the lack of oxygen for patients on life support made headlines, with the centre and states squabbling over responsibility and the Supreme Court forced to intervene.