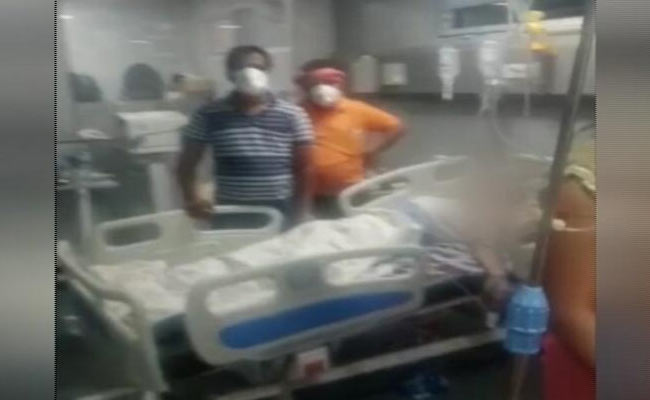 Relatives have alleged that the oxygen flow was interrupted for almost half-an-hour.

Four COVID-19 patients have died at the District Hospital in Barwani, Madhya Pradesh, relatives of the alleged victims claim. District authorities, while admitting a glitch in the oxygen flow on Saturday night, said only one person had died and that, too, of cardiac arrest.

Visuals shared with NDTV showed relatives struggling to help the patients amid the oxygen glitch. They said the flow was turned off for at least half-an-hour and alleged that those officials denying the deaths were lying.

“My child’s oxygen level was 94 since morning. Suddenly the flow stopped, sparking panic. My child was suffering. There was neither a doctor nor anyone else to help us,” said a woman relative of a patient.

Another such relative, Dr Prateek Soni, made the same allegation saying he lost his cousin due to this.

“At least four people have died while the collector is claiming that only one died. He is lying,” Dr Soni said.

Barwani Additional Collector Lokesh Kumar Jangid acknowledged that the authorities received a complaint from the hospital’s trauma centre on Saturday saying the oxygen flow in the central pipeline was inadequate.

“Immediately our oxygen mechanic attended to the problem and restored the flow. There has been no casualty due to low flow of oxygen. One patient died of cardiac arrest,” said Mr Jangid.

The state Medical Education Minister Vishvas Kailash Sarang had earlier claimed that there had been no deaths reported in Madhya Pradesh due to a lack of oxygen supply.