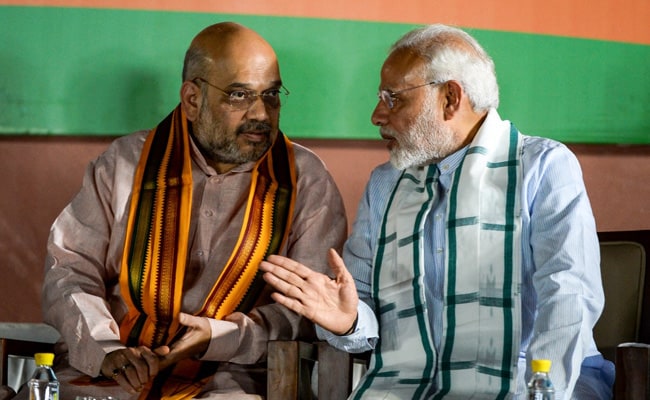 Alarm bells have started to ring for the BJP. But not because the results of the five assembly polls – Assam, Kerala, Puducherry, Tamil Nadu and West Bengal – have been apocalyptic for the party ruling at the Centre since 2014. Far from it. The BJP has won a renewed mandate in Assam. With a little spin – and the party is not bereft of spin masters – it can claim that its tally in West Bengal has risen from a mere 3 seats in 2016 to over 80 seats in 2021. Yes, it has done poorly again in Kerala and Tamil Nadu. But it can always put up a brave front and admit that it did not have high expectations from these two southern states. Puducherry, being a tiny union territory, doesn’t make much of a difference in the national scheme of things whichever way it votes. In normal times, the BJP could have claimed that this is just another set of state elections and that there is nothing extraordinary about the “win-some-lose-some” outcome. But these are not normal times.

It rarely happens – but it has happened now – that the timing of an election result becomes as crucial as the result itself. Viewed from this perspective, the BJP and its two supreme leaders, Prime Minister Narendra Modi and Home Minister Amit Shah, have a lot to worry about. Modi, in particular, is currently facing the worst crisis of his prime ministerial tenure because of the widespread perception, both in India and abroad, that his government has monumentally mismanaged the Covid crisis. This perception has solid basis in reality. Even without the BJP’s average performance in the five assemblies, Modi had begun feeling the heat of unprecedented criticism over his palpable failure to anticipate and plan for the second wave of the pandemic. Now, the heat will surely intensify due to the timing of the election results – they have arrived right in the midst of the daily news of Covid-related calamities from almost all parts of the country.

Much of this criticism will be on account of the BJP’s abysmal failure to dethrone Mamata Banerjee in West Bengal. Never in the 36-year history of the party had it fought so hard to win a single state election. Modi and Shah made it a prestige issue to install a BJP government in that state. After winning 18 of 42 seats in the state in the 2019 Lok Sabha elections (when the BJP gained majority votes in 122 assembly segments), they thought West Bengal was ripe for the picking. They deployed all the “weapons” in their possession – ED, CBI, Income Tax department, Election Commission, and tons of money – to win the electoral battle. In a state where all political parties have so far fought low-budget elections, they poured huge amounts of money into its campaign . They made a pliant Election Commission hold an eight-phase election, spanning nearly two months, in the state (as against a single-day polling in Tamil Nadu) so that the two leaders would get maximum time to campaign. As someone who stayed in West Bengal for almost the entire stretch of electioneering, I heard many independent observers derisively say that “Modi and Shah have become daily passengers coming to our state”. Even more annoying was the unbecoming content of the speeches by Modi and Shah. It was certainly not prime ministerial of Modi to make “Didi-o-Didi” taunts. They brought him instant applause from paid BJP supporters who had been bussed to attend his election rallies, but most ordinary and elite Bengalis saw it as an insult to a woman.

Modi had made a similar nasty remark while addressing the BJP’s election rally at Brigade Parade ground in Kolkata on March 7. Taking a jibe at Mamata Banerjee’s scooter ride to protest against the rising fuel prices, Modi had quipped, “We don’t want anyone to get hurt, but if Didi’s scooty has decided to fall in Nandigram, then what can we do?”

The BJP’s defeat in West Bengal is particularly worrisome for Modi because his party had projected him as Mamata Banerjee’s rival in the state. It was a foolhardy decision because the BJP thought that the Prime Minister’s imagined “popularity” alone would be enough to secure victory. This theory about Modi’s “popularity” – and hence his election-winning ability – will now be called into question, not only since it has failed in West Bengal, but also because his leadership has failed to prevent widespread deaths and agony due to the corona pandemic. Worse still, Modi and Shah, disregarding and violating the Covid restrictions laid down by their own government, recklessly continued their electioneering in the state. In short, the BJP’s principal assets could be fast losing their value.

The BJP should also start worrying about another factor. Prominently on display in the party’s campaign in Bengal was its leaders’ supreme arrogance made worse by their utter insensitivity. When four poor voters – all Muslims – were killed in firing by central security forces manning the poll process at Sitalkuchi in Cooch Behar district, there was no word of condolence or condemnation from them. Instead, senior leaders of the state unit of the BJP said more should have been killed. The party’s anti-Muslim bias was evident throughout the campaign. Not surprising, because its strategy to win the election was premised primarily on polarising the electorate on religious lines. For example, Suvendu Adhikari, a senior minister in Mamata Banerjee’s government who defected from Trinamool Congress to the BJP, publicly bragged about the saffron party’s “70 percent versus 30 percent” game plan – that is, consolidate the 70 percent Hindu votes and make ineffective the votes of nearly 30 percent Muslims. “Begum Mamata” is how many BJP leaders and supporters sought to malign the Chief Minister in the eyes of their party’s Hindu supporters. The voters of West Bengal, both Hindu and Muslim, deserve our highest appreciation because they defeated this vile divisive strategy.

As a matter of fact, the BJP’s poisonous politics of polarisation has been spurned in Tamil Nadu and Kerala as well. It may have worked in Assam, but here its victory was made possible also because the rival Congress-led alliance did not have a strong and charismatic leader (like Mamata Banerjee in West Bengal, MK Stalin in Tamil Nadu and Pinarayi Vijayan in Kerala) to lead the battle.

Communal polarisation is the only card Modi-Shah (and Yogi Adityanath, whose state, Uttar Pradesh, will go to the polls next year) can conceivably play to keep the BJP in the reckoning in the 2024 parliamentary polls. But what if this card is spurned by voters in more and more states, which is very likely? And what if non-BJP parties begin to get their act together and forge a credible and united alternative platform – with Mamata Banerjee acting as the magnet – which, too, is very likely?

Hence, alarm bells are ringing for the BJP. No doubt about it.

(The writer was an aide to India’s former Prime Minister Atal Bihari Vajpayee.)