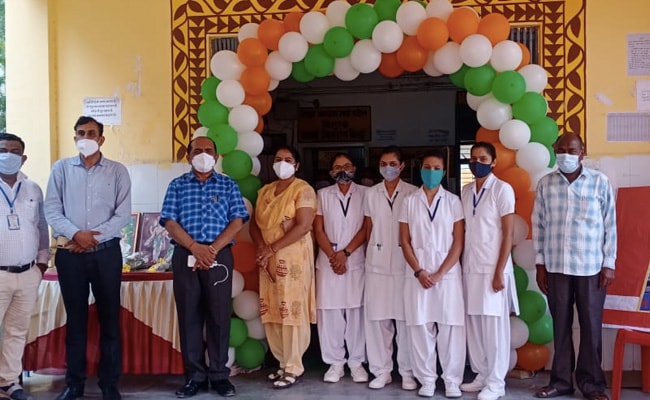 7,000 vaccination centres were set up across 52 districts of Madhya Pradesh.

Madhya Pradesh today administered over 16 lakh doses of Covid vaccine, the highest in the country, as the centre’s new policy on the immunisation exercise came into force.

Till 9 pm, the state had administered a record 16.41 lakh doses of Covid vaccine, much more than the target of 10 lakh it had set for the day.

Madhya Pradesh accounted for 20 per cent of the 80 lakh vaccine doses administered across the country on Day One of the new policy. Under the new guidelines, the centre has started providing vaccines free of charge to all above the age of 18 years and taken back control of vaccination from states.

Behind Madhya Pradesh topping the country in vaccine doses given out today are a slew of steps taken by the state government.

As many as 7,000 vaccination centres were set up across 52 districts to meet the initial target of 10 lakh doses. In several districts, the local administration had arranged transport to and from the vaccine booths, especially for the elderly and persons with disabilities.

The state government had also appointed a motivator for each vaccine centre. Chief Minister Shivraj Singh Chouhan, ministers in the state cabinet, elected representatives and social workers played the role of motivators at vaccine booths.

Nobel laureate Kailash Satyarthi, who hails from the state, had issued an appeal on social media, asking people to take part in the seven-day vaccination campaign and get their shots.

Chief Minister Chouhan started the day with a visit to the Maa Pitambara temple in Datia district and then reached Parasari village to launch the vaccination campaign there.

The Chief Minister said the guidance of Prime Minister Narendra Modi and his decision to give free vaccines to states were behind the immunisation exercise picking up pace in Madhya Pradesh.

He said the motivators had ensured participation in the vaccination campaign and said the figures are quite encouraging. “Corona has not gone yet, so stay alert and cautious. The Corona crisis has shaken the whole world. Our priority is to conquer Corona,” he said.

Lauding the state for achieving and going way beyond the 10 lakh target, the Chief Minister said in a Twitter post that if Madhya Pradesh makes up its mind, it can achieve any target.

To continue the momentum, the state has registered one lakh Corona volunteers who will work towards creating public awareness about Covid. A three-day vaccination campaign will be organised again on July 1 and awareness yatras will be taken out to encourage people to take the jabs.