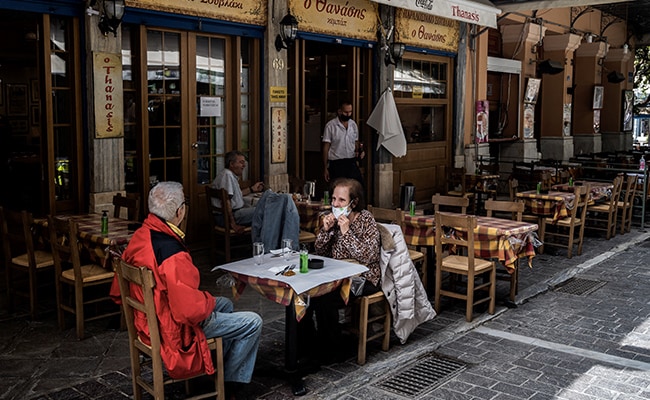 People sit at a restaurant’s terrace on Monastiraki square in Athens.

Greek restaurants and cafes reopened their terraces on Monday after six months of pandemic shutdown, with customers flocking to soak up the sunshine and a return to “normal life”.

“Today I feel like I’m alive again, like I’ve been revived,” joked Andreas Riminiotis, a retiree savouring the ambiance at the Da Capo cafe in Athens.

“Before the cafes closed in November, I use to come here every day to drink a coffee and talk with my friends. It was my favourite way to pass the time, the remedy to all ills,” he said, adding that he welcomed a chance to return to “normal life”.

The reopening was all the more poignant and joyous as it came a day after Orthodox Christians in Greece celebrated Easter, when believers mark the resurrection of Christ.

Greece has been under Covid-19 restrictions — including a curfew of varying strictness — since November.

The third wave of the pandemic has hit Greece particularly hard with the majority of the country’s nearly 10,000 virus deaths occurring over the last few months.

On Monday, the outdoor terraces in the capital’s trendy Kolonaki district filled up with customers.

“I haven’t worked in six months,” said Yannis Karagiannakis, a waiter. “I was going around in circles, was depressed.”

Some 330,000 people are estimated to work in the restaurant sector in Greece and on Monday only cafes and restaurants with outdoor seating were permitted to reopen.

He added that the Covid-19 pandemic had forced the closure of dozens of establishments in Athens and Thessaloniki and that scores more were in danger of going out of business.

Cafes reopening on Monday have to comply with the following guidelines — a maximum of six people per table, waiters wearing masks and testing once a week.

Greece, whose economy relies heavily on tourism, has sped up its vaccination drive ahead of the summer season, with people over 30 currently eligible for the jab.