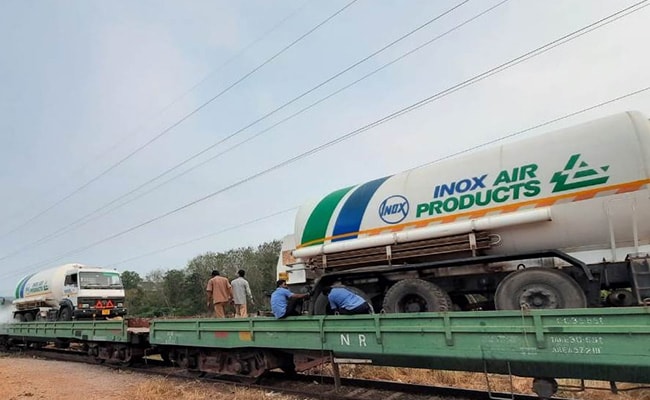 The Indian Railways has delivered 813 tonnes of medical oxygen across the country since April 19, Railway Board Chairman Suneet Sharma said on Saturday.

Fourteen Oxygen Expresses have already completed their journey and five more loaded trains are on the run carrying 342 tonnes of liquid medical oxygen in 18 tankers.

Further, six tankers for Delhi, five for Telangana, three for Uttar Pradesh, two each for Madhya Pradesh and Haryana are presently on the run, Mr Sharma said.

Madhya Pradesh received its second Oxygen Express carrying 70.77 tonnes of the life-saving gas to Jabalpur and Sagar from Bokaro on Friday. The third Oxygen Express to Jabalpur carrying 22.19 tonne of oxygen is on its way from Rourkela and is expected to reach Jabalpur by Saturday night, the railway board chairman said.

The first Oxygen Express for Telangana carrying 124.26 tonnes of LMO is currently on its way from Angul.

He also said the Railways has 4,176 COVID care coaches ready for patients with mild symptoms of COVID-19 disease. Of the 75 coaches with 1,200 beds are in place for Delhi, 50 coaches are at Shakur Basti station and the rest at Anand Vihar. Five patients admitted in these coaches, he said.

In Maharashtra’s Nandurbar, 24 coaches have been deployed which are now serving 92 patients, while in Madhya Pradesh, 40 coaches in Bhopal have 30 patients and 22 coaches in Indore have six patients.

The railways has also kept in readiness 30 coaches in Punjab’s Jalandhar, Ludhiana and Amritsar, 21 in Madhya Pradesh’s Jabalpur and 10 coaches in Nagaland’s Kohima.